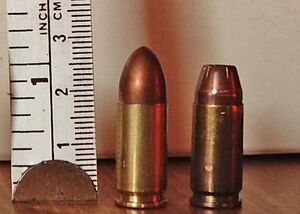 The 9x19mm Parabellum (also known as 9 mm Luger by C.I.P.[2]) is a pistol cartridge introduced in 1902 by the German weapons manufacturer Deutsche Waffen und Munitionsfabriken (DWM) for their Luger pistol.[3]. Because of this, it is commonly called the 9mm Luger cartridge. Its parent cartridge was the 7.65x22mm Parabellum, itself a descendant of the earlier 7.65x25mm Borchardt cartridge. The 9 mm Parabellum is used in pistols, submachine guns, and carbines.

The name Parabellum is derived from the Latin: Si vis pacem, para bellum ("If you seek peace, prepare for war"), which was the motto and telegraphic address of DWM.

Georg Luger developed the 9 mm Parabellum cartridge from the earlier 7.65 mm Parabellum pistol cartridge. In 1902, Luger presented the new round to the British Small Arms Committee as well as three prototype versions to the United States Army for testing at Springfield Arsenal in mid-1903. The German military expressed official interest in a 9 mm version of the Parabellum in 1904.

The initial cartridge was created by removing the bottleneck of the 7.65 mm Luger cartridge, resulting in a tapered rimless cartridge. The ogive of the bullet was slightly redesigned in the 1910s in order to improve feeding.

After World War I, acceptance of this caliber increased and 9 mm pistols were adopted by a number of countries.

To conserve lead during World War II in Germany, the lead core was replaced by an iron core encased with lead. This bullet, identified by a black bullet jacket, was designated as the 08 mE (mit Eisenkern - "with iron core"). By 1944, the black jacket of the 08 mE bullet was dropped and these bullets were produced with normal copper-colored jackets. Another wartime variation was designated the 08 SE bullet and identified by its dark gray jacket, and was created by compressing iron powder at high temperature into a solid material (Sintereisen - "sintered iron").

A special load (identified either by an “X” on the headstamp or by a green lacquered steel case) with a 9.7 g (150 gr) full metal jacket bullet with a subsonic muzzle velocity for use with suppressed firearms was produced by the Germans during WWII. Other countries also developed subsonic loads.

The 9 mm cartridge has been manufactured by, or for, more than 70 different countries and has become a standard NATO pistol caliber and as well as for military forces around the world. Its official nomenclature among NATO users is "9 mm NATO".

After WWII, the common weight of the 9 mm was changed to 8.0 g (124 gr) to increase the accuracy of the ammunition.Template:Cn Many police departments that use 9 mm rounds in their handguns switched to this weight after the investigation of the 1986 FBI Miami shootout, because the lighter 7.4 g (115 gr) loading used by the officers was found to be less effective than a heavier load like the 8.0 g. Bullets weighing up to 9.5 g (147 gr) are available.

During the period between the early 1980's and the mid-1990's, a sharp increase in the popularity of "Wonder Nines" coincided with the adoption of the Beretta M9 by the United States Army. At the time, most police departments were issuing .38 Special caliber revolvers with a six-shot capacity. The .38 Special was advantageous to other options like variants of the M1911 because it offered low recoil, the revolvers were small and light enough to accommodate different shooters, and it was relatively inexpensive. Possessing similar ballistics to the .38 Special revolver cartridge, the 9 mm is a shorter round, and being an autoloader cartridge is stored in flat magazines as opposed to cylindrical speedloaders or moon clips used with revolvers, so extra ammunition carrying capacities could be easily increased by as much as 250%. The 9 mm pistol cartridge can be accommodated in a compact frame pistol, able to be used more effectively by inexperienced shooters and smaller-framed officers.

Attempts to improve ballistics of the cartridge came in the early 1990s with the widespread availability of high pressure loadings of the 9 mm cartridge. Such cartridges are labeled "+P" or in the case of very high pressure loadings "+P+". Ballistic performance of these rounds was moderately improved over the standard loadings. In addition, improvements in jacketed hollow point bullet technology have produced bullet designs that are more likely to expand and less likely to fragment than earlier iterations, giving a 9mm bullet greater damage capability.

The 9 mm cartridge combines a relatively flat trajectory with moderate recoil. The main advantage lies in its relatively small size for a "large caliber" round, allowing users to carry greater capacity compared to other "large caliber" rounds like .40 S&W and .45ACP. Some firearm enthusiasts consider the 9 mm the "smallest" round to use for personal protection, with one-shot stopping power being the biggest factor in selection. Others consider the less powerful .380ACP to be the minimum while many large caliber proponants consider the ballistic results of the .45ACP the standard by which other pistiol rounds are judged. A main disadvantage of the 9 mm is its tendency to overpenetrate flesh when poor quality expanding or non-expanding ball ammunition is used. The subsequent result being relatively small wound cavities, due to punching through without causing enough tissue disruption to stop the subject. This makes shot placement more critical with less than optimal ammunition, and the use of modern expanding hollow-point bullets almost mandatory for most shooters. The energy delivered by most 9mm loads allows for adaquate expansion and penetration with good JHP bullets, but is marginal for imparting hydrostatic shock in human-sized living targets.[4]

Retrieved from "https://publicsafety.wikia.org/wiki/9x19mm_Parabellum?oldid=3704"
Community content is available under CC-BY-SA unless otherwise noted.