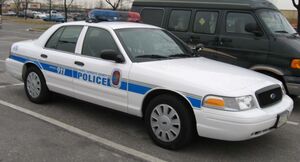 National Harbor, the largest mixed community development of its kind on the East Coast, is expected to have more than a million visitors a year. The development and growth of National Harbor as a waterfront convention and entertainment destination on the Potomac River, is expected to bring an increase in 911 calls and the potential for more crime. The surrounding neighborhoods are already some of the most crime-ridden in Prince George's County.[2] 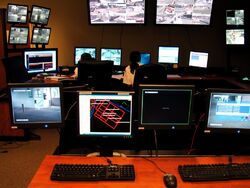 According to the Chief of the PGPD, the Department has redeployed officers (with three supervisors and 10 officers assigned to the National Harbor unit so far) to maintain a presence in the 300-acre complex and surrounding neighborhoods.[3] Towards what is expected to eventually provide 24-hour coverage of the Potomac River, PGPD has also assigned a sergeant and two officers to the marine unit.[4] Security cameras are placed strategically throughout the property and monitored by the facility's 24-hour command center. The surveillance system is complemented by security guards patrolling on foot, using motorized tricycles and all-terrain vehicles in conjunction with PGPD officers in cars and boats.Harbor, the safety plan for the 300-acre development has multiple layers and involves nearly a half-dozen law enforcement agencies. The private security team, headed by Bill Dunston, a retired member of the Maryland State Police, currently has approximately 30 officers and is anticipated to grow to about 100. The security officers are responsible for National Harbor's common areas, while the Gaylord Hotel has its own security.[5]

Retrieved from "https://publicsafety.wikia.org/wiki/National_Harbor_Security?oldid=17939"
Community content is available under CC-BY-SA unless otherwise noted.